Australian-owned and operated, MetroCount is one of the world’s foremost developers and suppliers of traffic monitoring solutions, with a presence in 120 countries across the globe. They are internationally recognised as the leader in vehicle, bicycle, and pedestrian data collection and analysis, assisting governments, urban planners, councils, and transport consultants to better understand traffic behaviour and growth.

Since 1994, MetroCount has established a very strong relationship with Derby Rubber, built on the foundations of Derby’s responsiveness, reliability, and willingness to work closely with MetroCount to find effective solutions to a range of challenges.

MetroCount pioneered the rubber tube vehicle sensors almost all Australian drivers have, at some point, encountered on the roads.

In the early 2000s, MetroCount sought to add bicycle counters to its portfolio of technologies. The problem, however, was that the existing rubber tubes used as sensors for motor vehicles were not sensitive enough to reliably detect every bike with the company’s new RidePod BT system. Fortunately, MetroCount knew they could turn to Derby Rubber for a solution.

Derby Rubber’s answer was a thin-walled, yet highly robust rubber tube, which was originally used to minimise noise in residential traffic surveys.

With the thickness of the rubber reduced, the tubes were more sensitive to the lighter weight of bicycles, thus making the counters more accurate. But just as importantly, being the same overall diameter as the original tubes, the new versions could be easily used on MetroCount’s existing equipment without the need for adaptors or re-engineering.

“We tested the RidePod BT, with both thin-walled tubes and regular tubes, against the highly accurate but much less portable RidePod BP bike counting system that uses piezoelectric sensors, permanently embedded in the bike path,” said Mike Kenny, CEO of MetroCount.

Their testing showed that, when Derby Rubber’s thin-walled tubes were used with RidePod BT, the accuracy of results was comparable to the sensitive, fixed-in-place RidePod BP. What’s more, those results were much more stable throughout testing, than those when regular tubes were used. 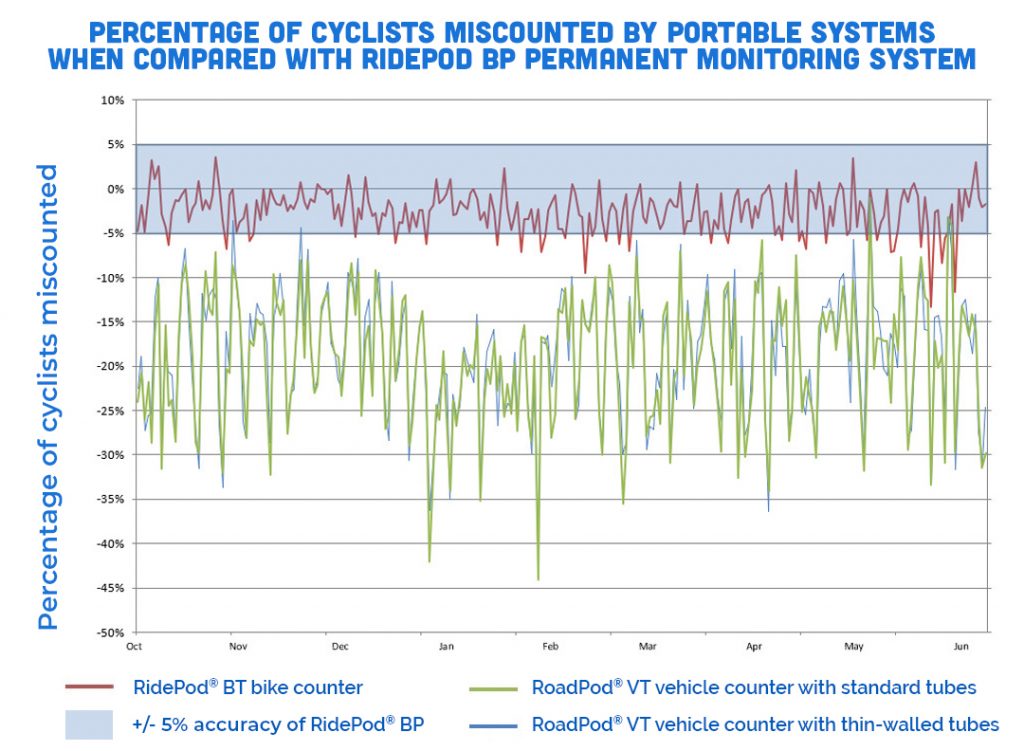 “Feedback from our clients was very positive, and while they noted that initial outlay for Derby Rubber tubes was greater, the durability and quality of the product meant they saved money in the long run, as the tubes lasted considerably longer.”

A number of MetroCount clients also commented that data received using the Derby Rubber tube was of a noticeably higher quality compared to alternative brands.

“We have clients in places like the United States and Brazil who refuse to use locally sourced rubber tubes and only purchase Derby Rubber’s product for their traffic monitoring systems.” said Mike Kenny, CEO of MetroCount.

“Like us, Derby Rubber is a family-run, Australian-owned company, which prides itself on quality products. Their customer service, friendliness and willingness to collaborate means we have become very close and enjoy a mutually-beneficial relationship.”

Click on the video below to see MetroCount’s bicycle tubes in use and how it produces accurate traffic data.

Back to Case Studies

At Derby Rubber, we work with our clients to precisely determine the product that will best meet their needs.

We are constantly looking for challenges and opportunities to grow and improve our processes and techniques.

Explore the creative solutions we can bring to your next project.